Last year, our colleagues at IGW Involute India and VCST Mexico obtained silver and gold respectively in Caterpillar’s yearly Supplier Quality Excellence Process (SQEP). These awards are handed out by Caterpillar to reward the suppliers who meet or exceed strict performance metrics. The metrics involve categories such as product quality, shipping performance and capacity planning and are measured over a one-year period. Suppliers can win either bronze, silver, gold or platinum with each level being more difficult to reach than the previous one. As Caterpillar is the world’s leading manufacturer of construction and mining equipment, diesel and natural gas engines, industrial gas turbines and diesel-electric locomotives, it goes without saying that both our plants are over the moon to receive their recognition.

Every year around late March or early April, our colleagues at VCST Mexico eagerly await the announcement of Caterpillar’s SQEP awards. After all, VCST Mexico are very familiar with the awards having obtained the gold label for three years in a row in 2017, 2018 and 2019. Before that, they obtained two silver medals in 2014 and 2016 having also won the bronze distinction in 2009 and 2012. Naturally, they are aiming for the platinum award in 2020. 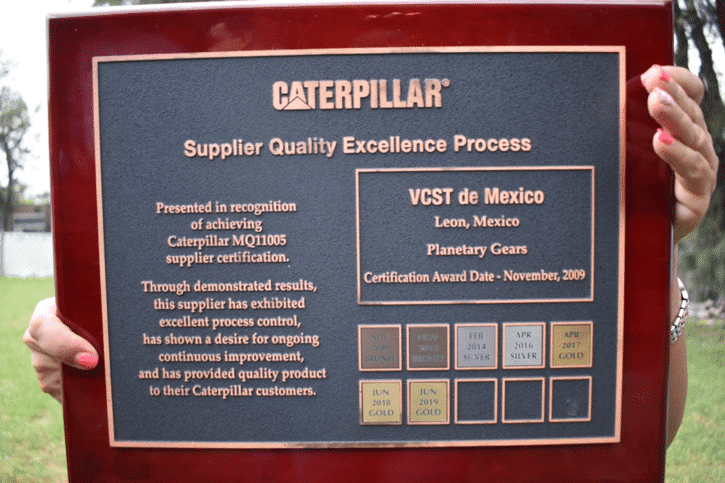 According to Juan Lozano, sales engineer and contact person in Mexico for Caterpillar, the SQEP’s are a great way to motivate the entire production line. “When we win, the entire crew working for Caterpillar is rewarded with a group lunch or dinner. Everyone, from the management to the production line workers, is also present when the award is handed over in our plant. It’s a good way to involve everybody. It’s also great for potential VCST customers because we can gain their trust through being a dependable partner to Caterpillar.”

Winning the award leads to more focus and attention to detail from everyone according to Juan. Indeed, focus is needed for the unique Caterpillar project, as 180 different parts are made by one single production line for 13 different Caterpillar facilities. That is also the main challenge for Juan and his colleagues. The one production line has to run smoothly and efficiently. It does so in large part thanks to the good communication between VCST Mexico and Caterpillar developped over a succesful 10-year cooperation period.

India for the win

Last year’s ceremony was organised in two parts. In the first part, representatives of Caterpillar presented the award to the management of IGW Involute India while in the second part, the passionate group of about 50 production line workers were rewarded for their hard work. In India too, winning the award serves as a great motivational tool for everyone involved in the production process. Indeed our colleagues confirm that the motivation of doing better in the SQEP’s is a great way to improve productivity.

In conclusion, receiving recognitions such as the ones from Caterpillar serve as a great way to keep everyone inspired and passionate about the products we make here. They are the best compliment we could wish for as they are a confirmation of our quality and reliability.

What else is new?